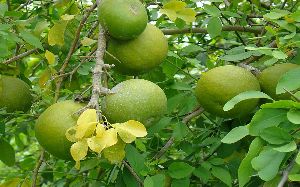 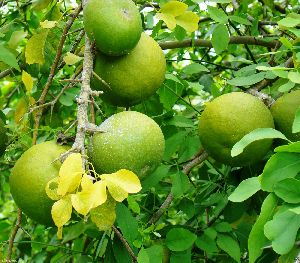 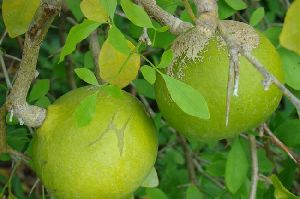 The bael fruit typically has a diameter of between 5 and 12 cm. It is globule or slightly pear-shaped with a thick, hard rind and does not split upon ripening. The woody shell is smooth and green, grey until it is fully ripe when it turns yellow. Inside are 8 to 15 or 20 sections filled with aromatic orange pulp, each section with 6 to 10 flattened-oblong seeds each about 1 cm long, bearing woolly hairs and each enclosed in a sac of adhesive, transparent mucilage that solidifies on drying. The exact number of seeds varies in different publications. It takes about 11 months to ripen on the tree and can reach the size of a large grapefruit or pommel, and some are even larger. The shell is so hard it must be cracked with a hammer or machete. The fibrous yellow pulp is very aromatic. It has been described as tasting of marmalade and smelling of roses. Boning (2006) indicates that the flavor is “sweet, aromatic and pleasant, although tangy and slightly astringent in some varieties. It resembles a marmalade made, in part, with citrus and, in part, with tamarind.” Numerous hairy seeds are encapsulated in a slimy mucilage.

Bel is an indigenous fruit tree of India. Bael grows in wild and semi-wild in the North India states of Uttar Pradesh, Orissa, Bihar, West Bengal, and Madhya Pradesh. It is considered holy in Hindu religion and the leaves are used as offerings for Lord Shiva.

The flowering season starts in late May. It has pale yellowish green sweetly scented flowers. The slightly pear-shaped fruits are green in color and turn yellowish on ripening.